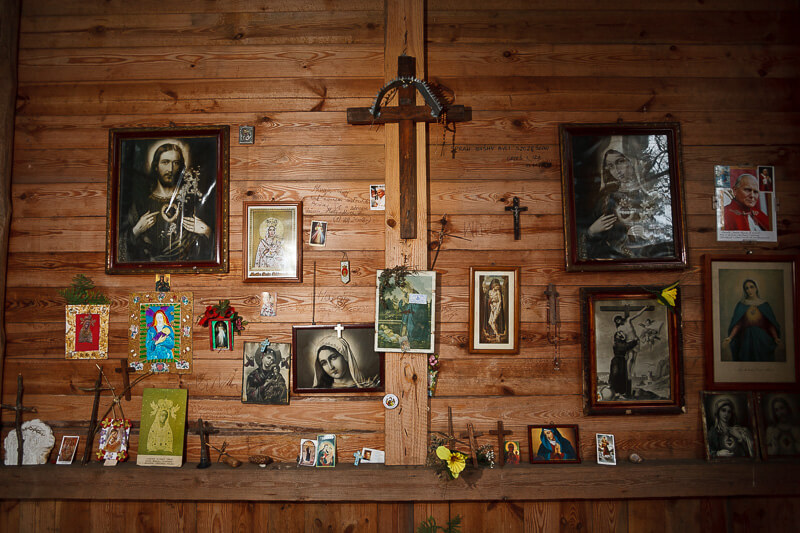 A forest path, silence all around. The only sound is birds singing. Rozpuda and the little river Jałówka flow nearby. This picturesque landscape filled with the aura of mystery conceals a very special forest clearing known as the Sacred Place.

If you take the forest path North-West of Augustów, two kilometres from the road from Szczerby to Raczki, you will encounter an unusual view. The Sacred Place does not look spectacular, its attraction lays in its simplicity and seclusion. The wooden chapel, the crosses, the little chapels hanging from trees and the large wooden sculpture all contribute to the atmosphere of contemplation.

This forest retreat was probably created on an old cemetery of St. John the Baptist Orthodox Church. The small chapel was built as late as 1990. Every year, on 24 June, a special mass for the commemoration of the old rituals is celebrated here. In the olden days the local community used to gather on the clearing, to make sacrifices, eat a ritual meal, bathe in Jałówka river and bind ornamental towels on the crosses. These rituals, characteristic of the Orthodox Church, ware celebrated on St. Jordan’s day.

The place has never been officially sanctified, but it has been considered sacred already in pagan times. Peoples’ faith is represented in stories of miraculous occurrences. In one of the legends, a woman who was pasturing cows saw an eerie light coming from the clearing. Led by this uncommon sight, she followed the light and St. John appeared in front of her eyes. A sculpture representing him has been found later in the forest. The place of this miraculous appearance was later called Sacred. The oak which was immersed in the light was made into a cross. It stands until this day.

One of the wooden crosses in the Sacred Place bears a copper tablet with a text by Father Antoni Kochański, a local historian and priest. It informs us that the cross has been founded by the converted Yotvingians, Skomęt and his companions, upon their christening in 1283. Legend has it that it miraculously came out undamaged when Pagans tired to destroy and burn it, and when it was thrown into the river, instead of flowing downstream, it came back to its place. It is also said that during the Tatar invasion or during the January uprising, the local communities were saved by Virgin Mary, who covered them with her invisible cloak.

Those who come to the Sacred Place often leave coins in the cracks of the wooden cross. It symbolises their presence, as well as their payers to God. That small gesture also bears witness to the fact that that this humble, secluded spot is still a place of worship and it has been visited by the faithful from the Pagan times until today.

The inhabitants of the local villages believe that the nearby river and the Jałowe Lake have miraculous powers. The water from the Jałówka river is said to have healing powers. The atmosphere of mystery is heightened by the fact that for certain period the river changes its flow. Some say that it is caused by the strong current of the nearby main river Rozpuda, but after visiting the Sacred Place, one is willing to believe that nature around the clearing projects a miraculous aura. The sphere of the sacrum speaks here not only through the objects of cult. Nature itself expresses it, in a pure, simple and understandable way. Visit the Sacred Place during your hiking or cycling trips, to experience the natural rhythm that flows through it.