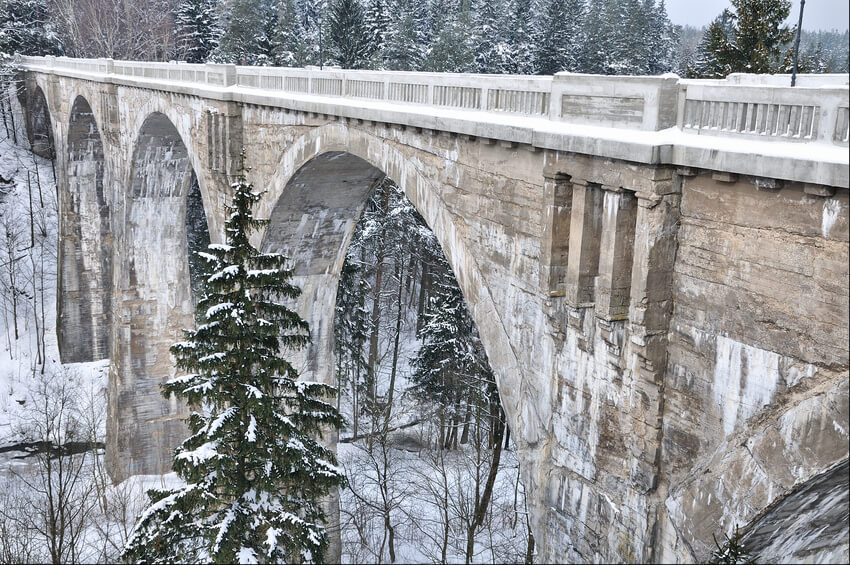 Warmińsko-mazurskie voivodship boasts Aqueducts modelled on Roman structures form the Italian city of Pont-du-Gard. Viaducts in Stańczyki, one of the highest bridges in Poland, are gems of art of construction and monuments of technology hidden among the landscapes of Suwałki region.

The natural beauty of Puszcza Romnicka, with all its pine forests, hills and rivers cutting through valleys is complemented with mysterious structures. Elements of inoperative railway infrastructure from the beginning of the 20th century tower over the valley and the small river of Błędzianka. Their sublimity is highlighted by the surroundings: the primeval nature, untouched by human hand. The unique reinforced concrete five-span structures, 180 meters long and 36.5 metres high are not regular railway bridges. They were designed by Italian architects and engineers, who valued both the practical and the aesthetic. The Stańczyki viaducts have been modelled on those in Pont-du-Gard in Italy. The bridges are often dubbed Aqueducts of Puszcza Romincka thanks to the elaborate decor of the pillars, the overhanging balconies, the openwork railing and the overall impression on those who come to see them to Stańczyki.

The mystery surrounding the construction of the bridges connecting Gołdap and Żytkiejmy has been uncovered relatively recently. The Southern Bridge was the first one to be erected. Its construction was commenced in 1912 and concluded five years later. The second one, the Northern bridge, stands parallel to the first  and was completed in 1918. It was executed with less meticulousness and diligence due to the outbreak of World War I. Most probably it was build by railway military and Russian prisoners of war. Railway tracts have been laid only on one of the bridges. Trains going from Chojnice to Olita in Lithuania started using it in 1927 (via Czersk, Smętów, Kwidzyń, Prabuty, Myślice, Morąg, Ornet, Lidzbark Warmiński, Bartoszyce, Kętrzyn, Węgorzewo, Gołdapia, Pobłędzie and Kalwaria). According to the old schedule of 1938, three trains a day passed through the bridge. Later on – probably due to the development of tourism in the region – an additional train was launched, which run on Saturdays and Sundays. In 1945 the railway tracks were dismantled by the Red Army, which was retracting from Poland. Since then the bridges of Stańczyki lost their previous function.

At the moment the grounds on which the viaducts are located are private property and you have to buy a ticket to see them. But PLN 4 is a price incommensurate with the impressive panorama offered by the 36.5 metre structure and the architectural beauty of this monument to construction technology. The bridges were once used for bungee jumping. Now that the owner has changed, such extreme forms of entertainment have been banned.

The Aqueducts offer an unforgettable vista over the valley and the whole area. The grounds of Puszcza Romincka around the bridges are also worth a visit. Their postglacial genealogy contributed to the remarkable diversity of the landscape, interspersed with little rivers. Maybe that is why the area is called Mazury Garbate (Hunchbacked Masuria).You will also find Tabell lake in the vicinity, which witnessed an explosion of methane during a violent storm on 31 May 1926. The methane was produced by the plants decomposing on the bottom of the lake. The whole lake disappeared under a layer of silt and mud thrown up in the air by the gasses accumulated under the bottom. Water appeared only several months later, when the silt and mud went down.

The alley of Swedish Whitebeams, which are now considered monuments of nature, are also worth a visit, as is the lake immortalised in “Dlaczego nie”, a film by Ryszard Zatorski. The Aqueducts of Puszcza Romincka themselves were featured in “Ryś”, a film directed by Stanisław Tym.