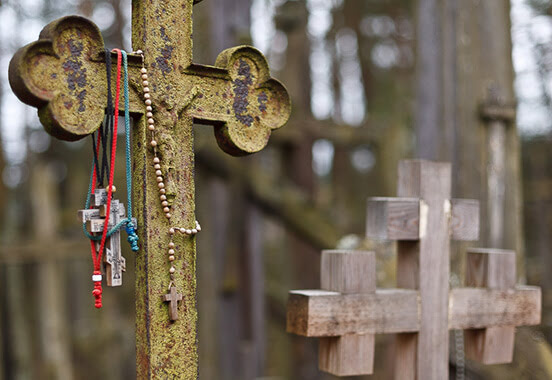 Grabarka. A hill of hope

The most important place of cult for the Orthodox Church in Poland is the sum of all the woes, joys and prayers of the faithful symbolised by thousands of crosses. Pilgrimages from all over the country come here every year to entrust their prayers and give thanks to the holy hill.

The oldest history of the Holy Mountain is steeped in obscurity. Many locals believe that Grabarka witnessed a miracle in 1710, during a pandemic of cholera in Siemiatycze. One of the inhabitants experienced a visitation. He heard a prophecy in his sleep – the only thing which would save the people was a pilgrimage to the holy mountain with a cross. The man immediately went to Paweł Smoleński, a parish priest at the local Greek Catholic church, who decided that the dream was a prophecy. The faithful came, a cross was set up and the disease was miraculously conquered. The inhabitants of Siemiatycze were saved thanks to their faith. In another version of the legend a stream, which flows from under the hill, was the source of salvation. Everyone who drunk from it, were said to have been cured. When the news of the miracle spread, other pilgrims started to come to the hill. In the summer of 1710, there were said to be 10 thousand of them. The stream, which flows nearby, is considered miraculous until this day.

A small wooden chapel has been constructed to give thanks for the miraculous salvation. From that day on, the faithful gather every year on 19 of August on Grabarka, to celebrate the Transfiguration. The Orthodox Church has been reconstructed and renovated several times and it survived until 1990, when, to everyone’s shock, someone had put fire to the temple. Thanks to the contributions of the faithful and government aid, a new one has been constructed in 1998.

Grabarka is also home to St. Martha and Maria nunnery, which has been founded in 1947. The beginnings of the nunnery were very hard, as it was right after the war. The sisters had few rooms, and there was only a makeshift house for the nuns. Initially they slept in the Bell Tower of the old Orthodox Church. Later, a second Orthodox church has been constructed, the church of Our Lady’s Icon “Joy of All Who Sorrow” , as well as rooms for the nuns and a house for the priests. An important event was the grand overhaul of all of the buildings in the 1960s, when the Transfiguration Orthodox Church received a new appearance thanks to the interiors designed by Adam Stalony-Dobrzański and Jerzy Nowosielski, professors from the Cracow Artistic University. There is also a third Orthodox Church on Grabarka – Dormitition of the Holiest Mother of God refectory church.

Ever since 1710 pilgrims have been coming regularly to Grabarka and setting up a votive crosses, which have come to symbolise this place, sometimes called “The Mountain of Crosses”. Until present, over 7 thousand crosses have been put there. Walking among those Christian symbols is an unforgettable experience. The wooden crosses of various sizes bear witness to people’s faith, and constitute a memento of pilgrimages and various prayers. Thanks to them, Garbarka is a hill of remembrance, hope and faith in God. Many of them bear names and prayer intentions. The most common are: “Nika” – “Victor” or “Spasi i Sochrani” – “Redeem and Save”, but sometimes there are personal and specific prayers, e.g. for perseverance in sobriety. Everyday, someone comes to the hill “bearing their cross”, hoping that they can entrust it to the holy hill of Grabarka.

How to get there:

You can get to the holy mountain by rail from Warsaw, Bialystok, Hajnówka and Siedlce. You should get off at Sycze, from where you can get to Grabarka on foot in several minutes. If you go by car, take the local road to Siemiatycze in the direction of Hajnówka. You will find the turn to the hill between Kajanka and Moszczona Pańska. You can also use the PKS bus service from Bielsko Podlaskie (from Białystok on Sundays).