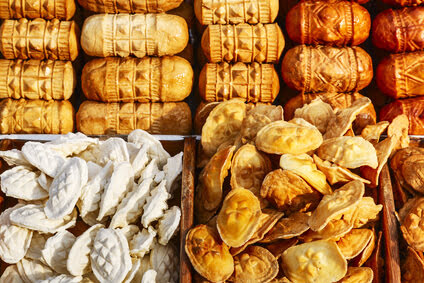 Oscypek and other Cheeses

Even a one day trip to the mountains does not count, if you haven’t tried the oscypek. It is a fact universally acknowledged and to question it would be folly. But…maybe it is worth reading about oscypek and other “mountain” cheeses before you encounter them on the trail.

You have to remember one important thing: the original oscypek, i.e. sheep’s’ cheese, is a seasonal speciality. They are made from the beginning of May to the end of September during the months when sheep graze on mountain pastures. The oscypek cheese is produced in a koliba, a special shack, which serves also as shepherd’s lodgings. Interestingly, oscypek cheese is produced only by men. It used to be said that women may put a spell on the milk and spoil the cheese, that is why they were restricted from entering the koliba from the beginning of grazing (roughly the beginning of May) until the Feast of St. John (24 June), as this is the period when the sheep give the most milk and are milked even three times a day (so the superstition is probably founded on more practical grounds…). The production is overseen personally by the baca, the head shepherd and cheese maker. The baca is also something of a “sales manager”, he manages the oscypek resources, as the profit from the sales constitutes an element of the shepherd’s payment.

And now a few words about the Podhale cheeses. First, the most popular and the best known – the oscypek. It has a spindly shape, like two cones touching at the base, it is from 17 to 23 cm long, with a diameter from 6 to 10 cm at the broadest point. I weights from 0.6 to 0.8 kg. For the production of one piece of such cheese (weighing just under a kilo) the cheese maker needs six to seven litres of milk! The sheep’s milk in the oscypek comes from Polish mountain sheep. The use of cow’s milk is allowed, but it cannot exceed 40% of the whole used milk and it must come from a species known as the Polish red cow. If you cut the oscypek in half, it is lightly creamy in colour. If properly stored, it remains fresh for 4 weeks.  In September 2005 the Podhale oscypek was entered into the Traditional Products List.

There are also… redykołki, which are small oscypki, also in the from of various figures, spindles, mushrooms, animals, birds, hearts and characteristic heart-shaped patterns called parzenica. The name comes from the tradition of distributing them during redykanie, which is the return of sheep from pastures to the farmsteads. Redykołka is very important for the Polish highlanders’ tradition. It symbolises sharing gifts with the nearest and dearest. Some of the redykołki were smoked longer to prolong their “shelf life”.

Gołka, also known as gazdowski cheese, is produced solely from cow’s milk, hence its delicate taste. It is especially recommended to those who like their cheese mellow and not too salty. In the past it was mainly produced in autumn and winter, when sheep were not milked, so not in the koliba, but in the family smokehouse. It is often confused with the oscypek, although its shape, taste and method of production are different.

Korbacze are a highlander’s speciality, which are made to look like pasta. You may find it hard to believe, but they have two hundred years of tradition behind them! Their taste is mild and less salty than the oscypek and they are great for snacks or as an addition to salads. They are made from cow’s milk; sheep’s milk is too fatty and the cheese cannot be moulded to the appropriate shape. Korbacze are often weaved into braids and they come smoked or in the traditional form.

Bundz (bunc), or “grudka”, is made of sheep’s milk, and it is a sort of cottage cheese. The production of bundz in its first stages looks the same as with oscypek. The bundz is formed on a canvass and looks a bit like a round loaf of bread. It is purely white or white with willow-green overtones. It has a thin clean crust with delicate coating. Fresh bundz has a mellow, subtle taste with sweet overtones. Only during maturation, under the influence of lactic acid bacteria, does it become a little bit sour and develops an aroma. It also acquires the characteristic holes. And during the maturation period the crust of the cheese hardens and becomes covered with bright-green coating.

The slightly salted and uncovered piece of bundz is left for several days in the fridge or a cool place – it then becomes slightly sour and it is processed further, primarily into bryndza, which is a type of soft rennet cheese produced on Podhale form sheep’s milk with an addition of cow’s milk. It is slightly piquant, intense and salty. Its consistency is paste-like, although bryndza from Podhale is sometimes a little bit grainy or even with visible lumps.

So much for cheese. I don’t know about you – but I’ve grown a bit peckish. And I could do with a drink. A cold beer with oscypek sound just about right…