Veturo.pl - Atrakcje turystyczne w Polsce i na świecie > Visit Poland - Places To Visit In Poland > On the trail of Churches of Peace 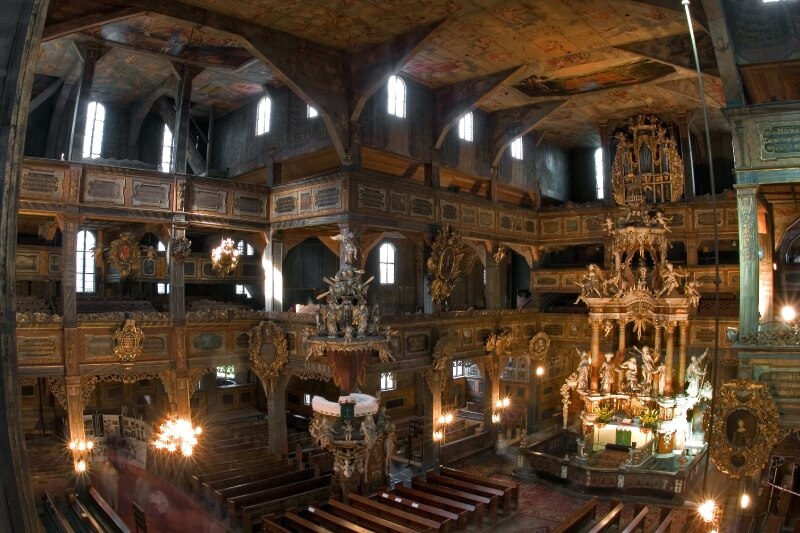 On the trail of Churches of Peace

UNESCO-listed and constructed without a single brick, nail or stone, those two remarkable churches are a must-see for all those visiting Lower-Silesia. Two of the three remaining Churches of Peace may be found in Świdnica and Jawor.

In order to fully grasp the uniqueness of the Churches of Peace, named after the Peace of Westphalia, during which it was agreed where the buildings would be constructed, one should go back to the 17th  century. It was then that the Protestants living in Świdnica, Jawor and Głogów received consent for the erection of their own temples, which were constructed after the Thirty Years’ War. The king of Sweden forced their construction on the catholic emperor of Austria, Ferdinand III. The emperor was not overkeen on the idea, so he imposed difficult restrictions for the construction: the churches could not have any bells or towers, they could not look like catholic temples, the building materials were to be non-durable (wood, clay, sand, straw) and they were to be located within the reach of canon fire from the city walls. Time and money were also an important limitation. The cost of the construction was to be borne by local communities and works could not take longer than a year. An architect from Wrocław, Albrecht von Säbisch, prepared the design thanks to which the churches not only were built in the designated time and according to the set restrictions, but also survived to this day and are still admired by tourists and music lovers, who come for festivals of organ music.

The church in Głogów was the first one to be constructed, as early as 1652. It was also the first one to be destroyed. Two years after the construction, the temple was demolished as a result of a hurricane. Despite the difficulties and the objections of the municipal authorities, it was reconstructed and this time it survived for 104 years. In 1758 the church burned down to the ground in a big fire and it was never reconstructed.

The second Church of Peace under the invocation of the Holy Spirit in Jawor was constructed at the end of 1654 and the beginning of 1655. The wooden structure of the church was filled with a mortar of straw, clay and pieces of wood, while the roof was covered with shingles (in 17th century it was the method employed by building sheds in Silesia). The structure is supported by 10 bays, and there are 4 storeys of matronea, i.e. galleries for, for instance, choirs. The oldest matronea – the second and the fourth – were constructed immediately, the first and the third were added at the beginning of the 18th  century. They are distinguished by their ornaments. The older matronea present scenes from the Old and the New Testament, and the new ones are dominated by images of coats of arms of local noblemen. The baroque ornaments of the interiors delight even those who are not partial to the baroque aesthetic. Around the church, on the area of today’s park, there used to be an Evangelic cemetery, which was liquidated in 1972. The church can house up to 6 thousand worshipers.

The Church of Peace in Świdnica has the best structure of the three, as it has been constructed the latest, in 1657. The builders could amend structural mistakes from their previous endeavours. The main part has three naves, and it crosses in the centre with 3 perpendicular naves. The sacristy has been added to the church, followed by the Hall of the Dead, the Hall of Weddings and the Field Hall. The church is not only bigger than the one in Jawor (it can house 7.5 thousand worshippers), but it is also more profusely decorated. The organs, the altar, the matronea and the roofs are full of images and painted scenes. Even someone who is not an expert in art or architecture will appreciate the meticulousness, the attention to detail and the method of execution of the structure, which was supposed to fall with the first gust of wind, but has survived 400 years.

Both Churches of Peace are open for tourists from April to October, in other months sightseeing is possible only after previous arrangements. You can have a cup of coffee after sightseeing at a pleasant café open by the church. There are plans of building an information point about UNESCO listed structures, a pension house and a restaurant, so as to attract more visitors. And it is well worth the trip, as you rarely encounter structures built in defiance of rules of construction which are stunningly beautiful at the same time.

meta_title: Poland - On the trail of Churches of Peace

meta_title: Poland - On the trail of Churches of Peace