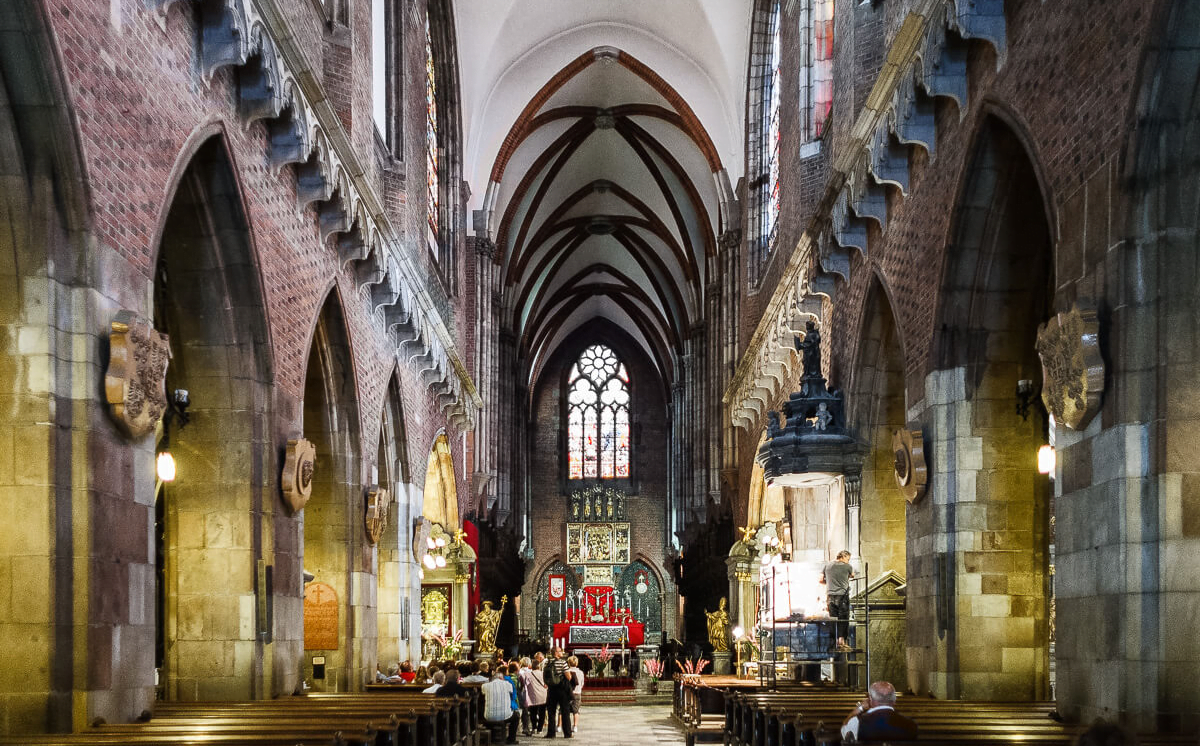 Wroclaw legends are not all about Ostrów Tumski, there are also many surrounding the most important church of the city – the Cathedral of St. John the Baptist. Wroclaw’s main church has its own share of ghosts and magic.

Wroclaw Cathedral has been constructed around the 13th century. It was reconstructed several times, among other things, due to the destructions of war. The old walls are like pages in a book of uncanny stories passed on by generations of Wroclawians.

Beware of the white roses

The clerics at the Cathedral of St. John the Baptist believe until this day that the day of their death is determined by a white rose found on their seat at the temple. A certain 19thcentury vicar found a white rose on his seat and put it on the seat of his older colleague to reverse the bad omen. This ruse, however, was not effective. Bells tooled for his death only three days afterwards.

The legend dates back to the times of Bishop Lawrence, who was particularly fond of white roses. One evening, his devoted servants, willing to please their master, filled his whole bedroom with these flowers. That night, the bishop fell asleep lulled by the sweet scent of his beloved roses to never wake up. Others say that Lawrence loved not the flowers, but a women called Agnes (catholic priests could have wives back then). Fate was not kind to the lovers and the girl died. A bush of white roses was planted on her grave. The cleric’s servants, willing to soothe his despair after loosing his beloved, decorated his room with flowers. That night, the girl came to the bishop gave him a white flower and took him to heaven.

There are two damaged sculptures on each side of the entrance to the Cathedral. The weathered stones still bear some resemblance to a lion and an eagle. Wroclawians still believe that the figures bring love to the lonely. A woman has to pet the lion, a man – the eagle. Judging by the state of the sculptures, many maidens and bachelors believed in the happiness that gesture may bring.

The Elector’s Chapel is guarded by a sculpture of a Madonna with Child. The legend connected with it dates back to World War II, when the church was converted into an ammunition depot. The Russians found out about it and attacked the temple. During the bombarding, the Madonna fell off its plinth and the fire devouring the church suddenly stopped right before it. Three chapels were spared from the fire: the Marian Chapel, Chapel of St Elisabeth and Elector’s Chapel.

Some tourists may notice a head with a face fixed by terror protruding from the wall of the South Tower. It belonged to a young boy who fell in love with the banker’s daughter. The father promised his daughter’s hand to him if the boy would find a fortune. After a few years he came back to town as a rich man. The money came from robbery, however, and the father had to decline again. The furious young man set fire to the banker’s house and went up the cathedral tower to feast his eyes on his revenge from its window. The walls of the church imprisoned him forever as a punishment for his wickedness.

The oldest Wroclawians tell tales of miracles at the Cathedral. One of them is the ghost funeral procession which can be seen passing through the main nave every year on 22 January (feast day of St Vincent of Saragossa, the patron saint of the chapter). Those who have seen this phenomenon say that one can also hear choral singing, whispered prayers and the tolling of bells in the empty church.

The ghost funeral procession appears every year. They say that the first one was seen on the day Henry and Maria died. They were a couple of unhappy lovers, who found each other after long years, but could not be together anymore. Henry had just become a priest and devoted his life to God. However, his love for Mary haunted him. He decided to take her to Wroclaw and hide her by the sacristy where he lived. In the morning he wanted to ask favour with his uncle, the canon of the Cathedral. Henry’s plan failed. Just as the young couple crossed the threshold of the church, they saw the ghost funeral procession praying for the soul of Henry. The man was so struck by the vision that he died at his lover’s feet. Maria, not being able to bear the death of her lover, died out of despair.

meta_title: Stories of the cathedral - Poland

meta_title: Stories of the cathedral - Poland