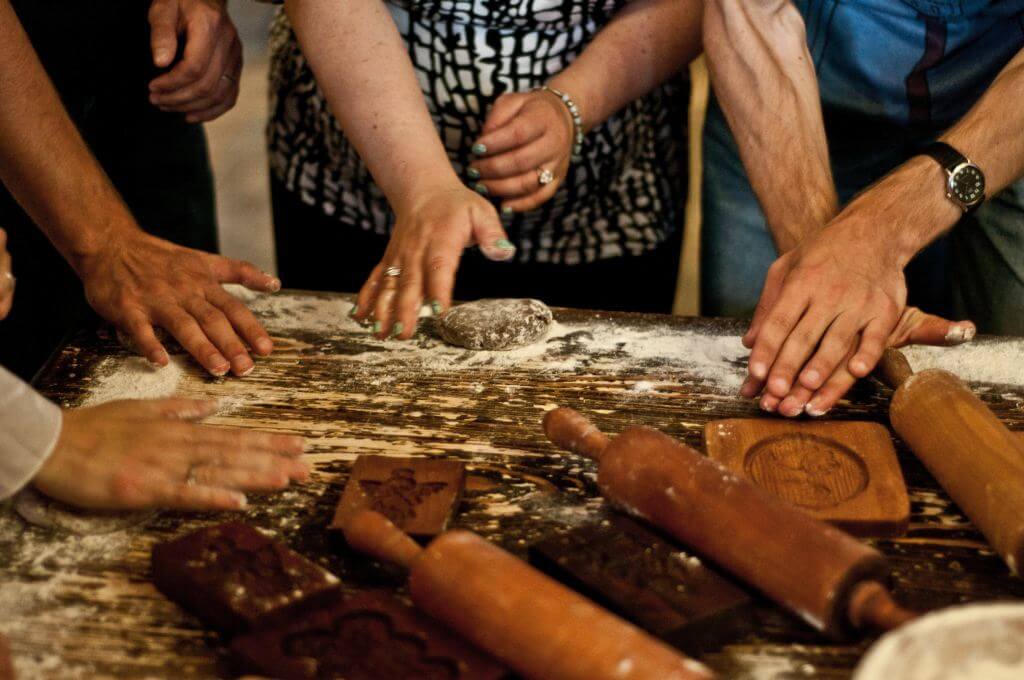 Torun has cinnamon in the air

A note of honey and spices - crushed cardamom, cinnamon bark, a pinch of pepper – and a five-hundred-year-old recipe has been drawing gluttons, both big and small, to Torun for years. The unique taste of gingerbread made it one of the most characteristic cake ever and earned it its own capital.

Cracow is famous for its Wawel Dragon, Wroclaw for its gnomes, while Warsaw has its siren. But Torun, a city in the North of Poland, instead of honouring fairy-tale creatures and legendary characters, hands the rule over to sugar and spice. The home town of Copernicus is symbolised by a cake of singular taste and unique recipe, made of dough mixed with honey, cinnamon and cardamom with almost imperceptible, yet characterful, overtones of pepper. Legend has it that gingerbread was discovered thanks to Katarzynka, a baker’s daughter from Torun. She was given a task of preparing sweet delicacies for the king, who was to visit the town. The locals believe that the recipe was given to the girl by bees, which persuaded her to add honey to the bread. The ruler was so delighted with her gingerbread that he started to praise Katarzynka’s baking all over Poland and the world. From that day on the small cakes with honey and spices, called after their creator, katarzynki, have become a Torun speciality. You can believe legends or not, but historical sources say that the first gingerbread was baked in the 14th or 13th century. Gingerbread is first mentioned in 1380 when a baker called Niclos Czana lived in Torun, who apart from rolls and bread, sold the famous cakes. The name in Polish – piernik – most probably comes from the pinch of pepper and spice added to the traditional flour and honey dough recipe for the honey-cake. The oldest known recipe for gingerbread comes from 1725.

Torun has become a paradise for those with a sweet tooth, irrespective of their age. Gingerbread follows your every step around here. The piernik is the real king of the streets of this town. There are two museums devoted to gingerbread in Torun: the Gingerbread Museum in the old tenement house on the Old Square (ul. Rabiańska 9) and the World of Torun Gingerbread exhibition in the undergrounds of Copernicus House. Both exhibitions offer you an opportunity to discover how a Gingerbread Master works and you can take an active part in the baking process with the use of old-time utensils. Using several simple ingredients you can conjure up your own legendary katarzynki and receive a certificate as a proof of the acquired skill. The reduced ticket for school children and teenagers to the Gingerbread Museum is PLN9.5, and PLN12 for grownups.. Normal entrance fee to the World of Torun Gingerbread is PLN11 and the reduced fee is PLN7.

Following the example of other Polish and foreign cities, Torun created its own walk of fame, all under the auspices of Torun’s most celebrated cake. The Gingerbread Walk of Fame has been set up in 2003 on the promenade in front of Artus Court. The gingerbread-shaped plaques bear autographs of famous people who come from Torun or are somehow related to the town. Another attraction is the gingerbread-themed playground, called Gingerbread Town, which was created in 2004 and is dedicated to younger children.

But Torunians’ love of gingerbread is best expressed during Torun Gingerbread Days, which are celebrated on one of the weekends of June. Many tourists flock to Torun for this occasion, drawn by their love of the honey and spice cake and the Town of Copernicus itself.

meta_title: Torun has cinnamon in the air - Poland

meta_title: Torun has cinnamon in the air - Poland