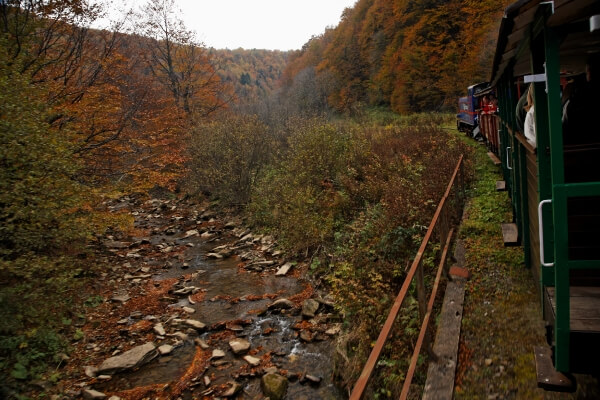 Its tracks run through the most beautiful corners of Bieszczady. Sitting in one of the little carriages, you see mountain landscapes forgotten by civilisation pass in front of your eyes. Mountain trail railway.

Bieszczadzka Forest Railway has been founded before World War I. This narrow gauge railway has been created to transport wood from local forests. For long years it served the locals employed at the sawmill. Now, it has become the main attraction of the region. Once forgotten, today – thanks to the Bieszczadzka Forest Railway foundation – it received a second life. What are its secrets and history?

The 750 mm gauge tracks were constructed in the years 1890-1895, following the initiative of companies from Vienna and Budapest who bought wood from Bieszczady forests. This solution benefited the local communities, who could count on employment by tree felling and railway maintenance. And the villages on the railway route, Majdan, Cisna, Dołżyca and Przysłup, thriveed as a result.

In 1920s the Bieszczadzka Railway was taken over by the Board of the Lviv directorate of Polish State Railways. It was destroyed during World War II and reconstructed in the years 1954-1964. Apart from wood, it started carrying the employees of the sawmill and locals. Individual passenger carriages were attached to the trains transporting freight. In 1960s the influx of tourists influenced the decision to permanently introduce passenger transport.

In 1996 State Forests handed over the administration to Bieszczadzka Forrest Railway foundation, which continues to take care of the railway until today. Since 2012 – after a 23-year break – the forest railway has been operating during the winter break on weekends. At the moment the headquarters are located at the main station in Majdan from where the trains set out on the Majdan-Cisna-Dołżyca-Przysłup route. Tourists can ride the whole route in 45 minutes or hop on and off on individual stops to enjoy the charms of the small, but interesting towns. You can get off in Cisna and follow the red trail to Wołosań (1071 m) or visit the little “rainy” town itself. The year average rainfall in Cisna is the highest in Bieszczady. From the small village of Dołżyca you can follow the black trail to Łapiennik (1069 m), also called Grzbiet Baligrodzki. While from the terminus in Przysłup, you will have a straight and fast ascend to the Jasło peak view-point (1153 m).

When is the best time to take the train? The forest railway offers views of mountain pastures, Ciśmańsko-Wetliński Landscape Park and Bieszczady National Park all year around. Bear in mind, however, that in May, June, September and until 20 October the train operates on weekends and bank holidays only, departure from Przysłup at 10:00 and Balnica at 13:00. The forest railway operates everyday only in July and August. In winter 2014 – starting from 25 January – it will be operative only during school winter breaks on each Saturday on the route to Dołżyca. Departure time scheduled at 12:00. The trip lasts an hour. Winter operation is planned until 1 March. There is also an option of scheduling rides for groups.

A ticket is approximately PLN15. You can buy it on the day of departure from 9:00 (from 11:00 in winter) at the ticket office at the main station in Majdan. Children under 3 ride free of charge, seniors over 65 and children from 3 to 16 can buy a reduced ticket. For a detailed schedule and prices, go to the foundation’s website: www.kolejka.bieszczady.pl.