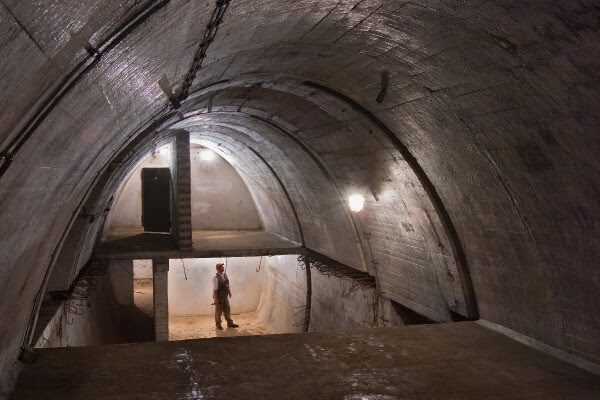 Sightseeing on holidays? Deeply unexciting, especially for a guy. An art gallery, an old church, a manor house? Bored stiff already! Sightseeing must involve adventure, adrenaline and scenery so fantastic that boys back at the office could be envious for months. So, let’s skip the history of art, and go straight to the history…of war.

There is a place you simply have to see. It is called Międzyrzecz Fortification Region and it is the largest cluster of bunkers, revetments and fortifications in Poland. It was constructed by the Germans in the years 1934–1944 in view of protecting their Eastern boarder. It is – which is an interesting fact in itself – one of the biggest underground fortifications in the world. It starts in the vicinity of Skwierzyna, stretches through Kaława, Wysoka, and Boryszyn and reaches the Oder River. Not surprisingly, at the moment it is not used according to its original purpose. It is, first and foremost, a bat sanctuary. Over thirty thousand representatives of 12 species of this flying mammal winter here. The network of underground corridors is over thirty kilometres long, but tourists have special routes prepared for them, depending if they have two hours or six hours to see everything. Well actually, you can never see everything, as a large part of the area (in fact almost half of it) is not accessible for tourists. Naturally, the biggest attraction is the underground complex. As I mentioned before, you can take various routes, but you must always be accompanied by a guide! There is the 1.5 km route, or the 3 km one. You can also choose other variants on individual request. You can ride an underground draisine, see the museum, and if you are lucky, take part in one of the Military Vehicle Rallies that are frequently organised here. And that is not all! There is the post-war Soviet Nuclear Base, and many other attractions: mysterious treasures found in underground tunnels, left by the Germans who rented premises in the times of the Third Reich, many traces of the intensive search for the famous Amber Chamber as well as quads, paintball, and even kayaking (of course all this above ground). Ii is a kind of an open secret that war is still continued in Międzyrzecz Fortification Region…However, this war is played out, in a very limited scope and solely with the use of very conventional weapons, between the guards of the bat sanctuary and…the treasure hunters. The facility is closed from November to April, but you know…It is hard to securely close off such a vast area, especially if there are dozens of known entrances and many more unofficial ones. All doors are locked and welded for winter. Let this be an admonition to all adventure seekers, who would like to penetrate the bunkers illegally to look for „souvenirs”. If this is not warning enough, there is a simple wooden cross at the bottom of one of the stairwells, commemorating a scout who died after he fell from the height of 8 meters. Although many places were destroyed or devastated, you are sure to be amazed by these mighty concrete walls. The most impressive are those elements, which were blown up during battle. The explosions were so strong, that they left cracks, gaps and rifts between the huge concrete slabs. I was especially impressed with a piece of flooring slab, that was thrown into the air with the force of the explosion and fell on the exactly the same place, but…upside down. One more thing, regardless of the weather outside, you should dress appropriately to visit the bunkers. Appropriately means warm! The average temperature underground is around eight degrees Celsius, and once you are in, you can’t pop out to warm up. Most routes are arranged in such a way that once you go in, you have to walk the whole stretch to get out. But it is well worth the trek, even if you don’t encounter any bats on your way…